All good things come to an end

The last day of our trip to London included a tightly packed program of science, history, culture and theatre. Well-rested and strengthened by a hearty breakfast, we headed to the operating theatre dating back to the 12th century. There, we explored the museum of historical medical instruments and medicines. The actual operating theatre itself was located in the attic of a church. In the theatre, we received an informative, yet humorous lecture on the topic of medical procedures throughout the 19th century. As it turned out, having a disease or an injury in those times would have been very unpleasant due to general lack of hygiene or anesthetics. Most of these procedures were gruesome and usually also fatal. 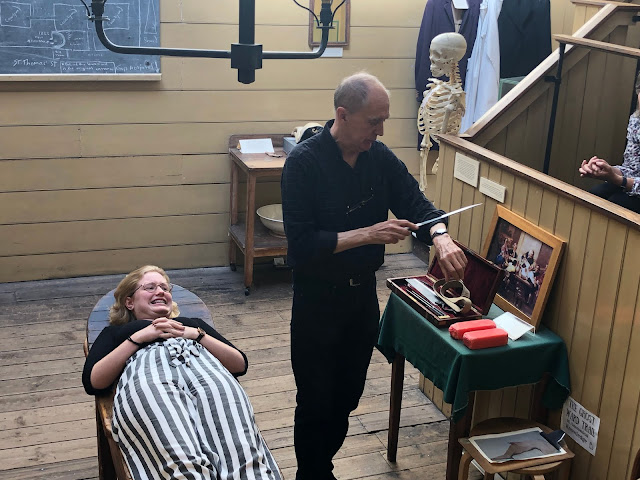 The images from the operating theatre left us without too big of an appetite for the upcoming meal. This was served at the Wild Food Cafe, a vegan restaurant in the heart of Soho. The vegan meal was a change of pace among the typical meals we had throughout the week. 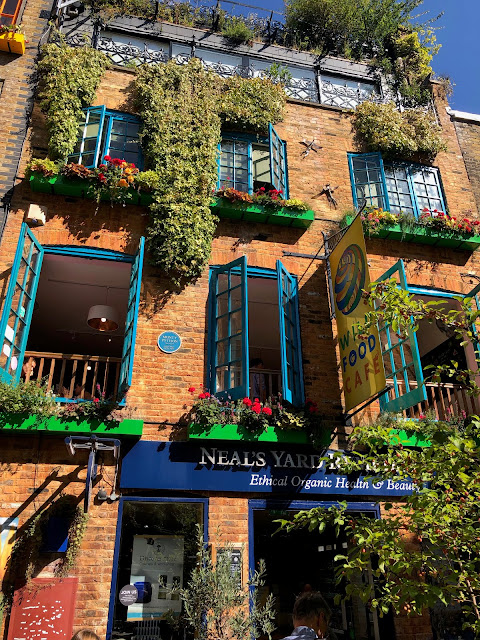 Well-fed, we continued on to a Harry Potter walking-tour through central London. This journey led us through many sites on which scenes from the Harry Potter universe were filmed or inspired by, including Dyagon and Nockturn Alley and Platform nine and three quarters. Along the way, we took part in a quiz, where the group was split up in the Hogwarts houses answering questions on details about the Harry Potter world. Hufflepuff emerged victorious.
After a short break in Coven Garden, we had a mixed asian-style dinner in a high-tech restaurant called Inamo. In the restaurant, the menus were on tablets and the tables were huge interactive displays themselves.
Straight after the meal, we headed to Lyceum Theatre for an extraordinary performance of the musical Lion King. The whole group was thoroughly impressed by this spectacle.
This day was a fitting end to an amazing week with a multitude of scientific and cultural experiences, leaving us in awe of the generosity of Roche. 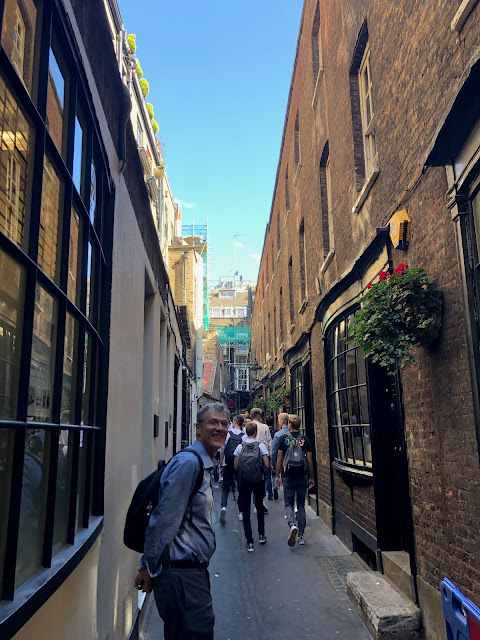 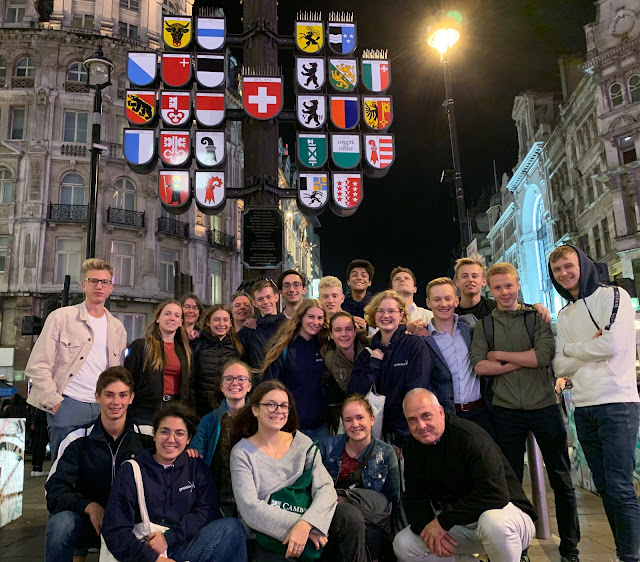 Again, it was an exciting day. Approximately at 9'o clock we took the bus and drove all the way down to the English Roche-Headquarters in Welwyn Garden. We were friendly welcomed with tea and biscuits and then had an exciting morning with two workshops, one about statistics, one about drug development. After the two workshops we met with a local class of same-aged students. We shared lunch with them, which Roche so generously provided. The meal was delicious. 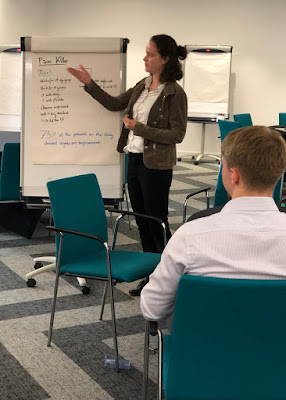 In the afternoon Roche hosted two guest-speakers who held a lecture about the brain. In detail, they  talked about the specific connections in between neurons in order to generate memory. We again had two workshops, in one we could measure our brain activity with an EEG, in the other we made a model of a developing infant brain.

Afterwards we all went to the Tewin Bury Farm Hotel, where we had a tasteful BBQ Dinner and an exciting evening of garden games where we had a thrilling football match and thought the local school about our national sport, "Schwingen" (swiss-style wrestling). The departure was delayed for two hours, we killed the time with some refreshing drinks. After-all, another exciting day.
Eingestellt von B16a Keine Kommentare:

The program on Wednesday started at 8.45. We met in the lobby of the hotel and headed off to the L'Oréal Young Scientists Centre, which is located near Green Park. As soon as we arrived, we put on lab coats and goggles and entered the laboratories, where we would solve an exciting crime. The goal was to catch the killer of Tom using modern techniques in forensics. 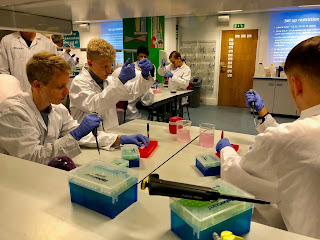 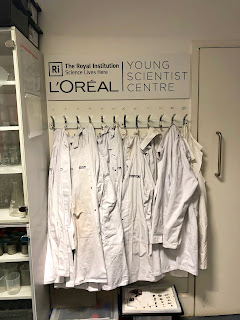 We needed to compare the DNA which was found on the victim with the DNA of five possible suspects. The DNA was fragmented by restriction enzymes. The fragments are specific to each person. This means that when one looks at the fragments of the DNA at the crime scene and compares them to the suspects, there needs to be a match. 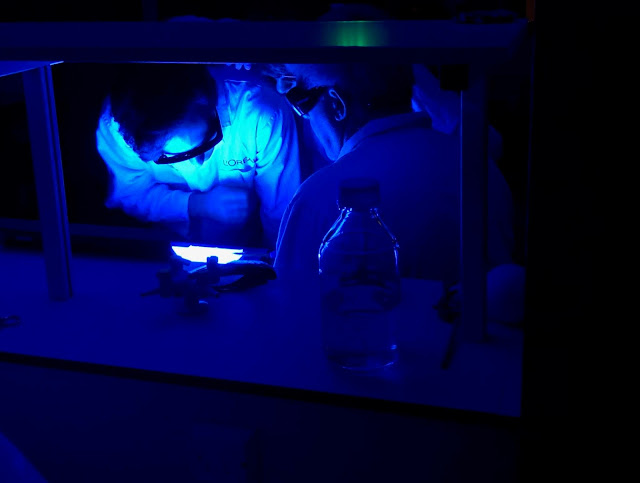 We put each of the samples on the gel and applied a voltage. The voltage makes the negatively charged DNA move towards one of the poles. The distance is reversely proportional to its size. Therefore, we got one specific pattern for each sample. One of the samples had a pattern which was the same as the one of the DNA found in the crime scene, which meant that this person was the murderer. The work in the labs was very exciting because most of us could never do this at high school.

After the workshop, we had a picnic lunch in Green Park. We enjoyed getting away from the busy streets and were looking forward to the afternoon.

The afternoon was full of shopping and sightseeing. We split up into groups of three or more and were allowed to go wherever we wanted. Most of us headed to Oxford Street to visit the most famous shops of London.

After a short walk to Southbank, we enjoyed a great Mexican meal at Wahaca. We each got to choose two or three smaller dishes so that everyone had something they liked. Dinner was followed by a fabulous dessert and a beautiful London sunset.

Back at the hotel, some students went off to the gym in order to burn the calories from before. There are badminton courts, boxing bags and more. 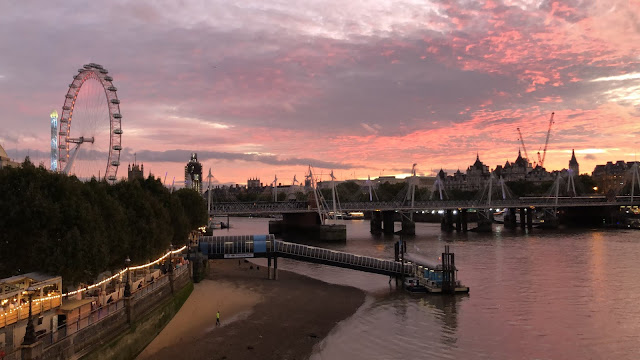 Today, the day started earlier: The coach picked us up at 8 AM at our hotel and drove us all the way to Cambridge. After an informative Walking-Tour through the different colleges, we had lunch at the Cambridge University Dining Hall. We really enjoyed the atmosphere in this beautiful, but rather cold, dining hall. We then spent our afternoon in the Department of Pharmacology, listening to an interesting lecture about the uses of mole-rats. We learned that mole-rats are fascinating to work with due to their resistance to cancer and pain and their special lifestyle. Later on, our practical skill was required in the Cambridge Biochemistry Workshop, where we did a sodium dodecyl sulfate polyacrylamide gel electrophoresis (SDS-PAGE), which was new for some of us. In the following free time, some of us went to the Eagle Pub, whereas others strolled through the shops of Cambridge. The Eagle Pub is well-known for being the location where Watson and Crick announced their double-helix DNA-model for the first time. The day ended with a delicious dinner at The Olive Grove and a lazy drive back to the hotel. 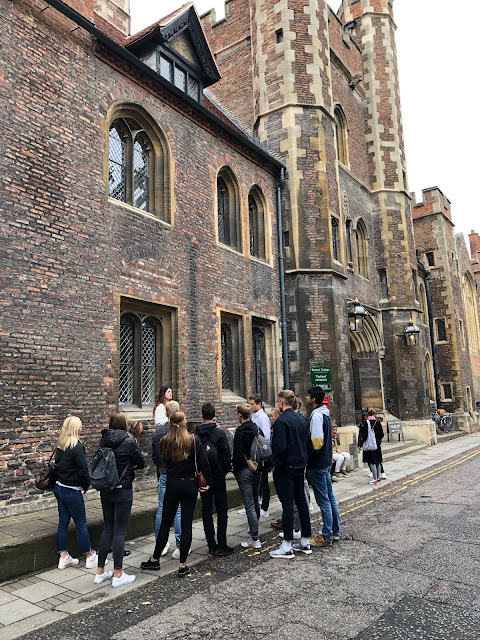 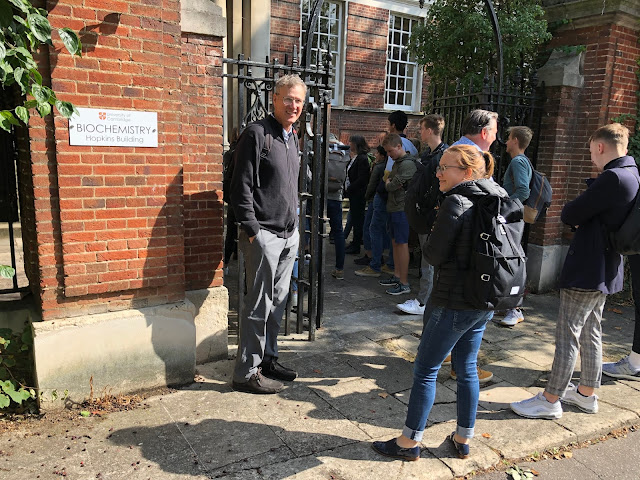 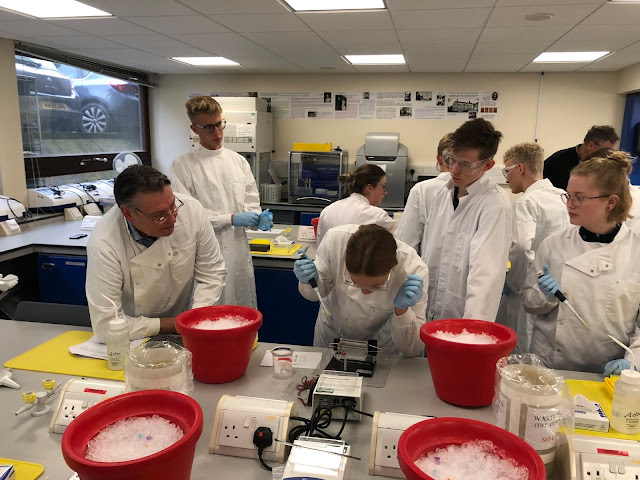 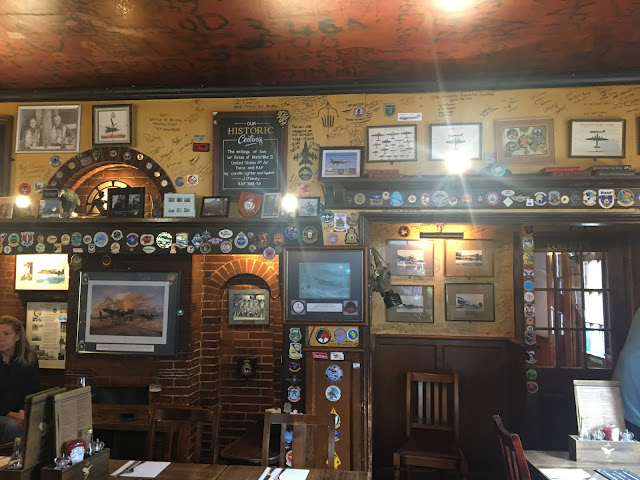 On our first day in London we started off with a nice English breakfast.
Afterwards, we headed to our first stop which was the Science Museum. All of us participated in a VR experience. We got to see how a landing of a space shuttle feels like. Some students decided on going on board of a 360 degree flying simulator which felt more like a rollercoaster.
A sightseeing bus, the BB bakery, picked us up and treated us a terrific English afternoon tea and lunch. We got to enjoy sandwiches, savory muffins and as a desert a wide range of cupcakes and scones. Warm drinks were included.
The bus dropped us off in front of the Natural History Museum where we were given three hours time to discover the museum ourselves. Even though we were given so much time it would have never been enough to see the whole museum. Either way, we learnt a lot of new interesting facts.
After a quick stop at our hotel we made our way to the Bloomsburry Bowling Center where we had the whole Kingpin suite all to ourselves! Apart from bowling we also had a nice dinner and played games such as PingPong, Cricket Simulator and Air Hockey.
We are already looking forward to our second day where we will be visiting Cambridge. 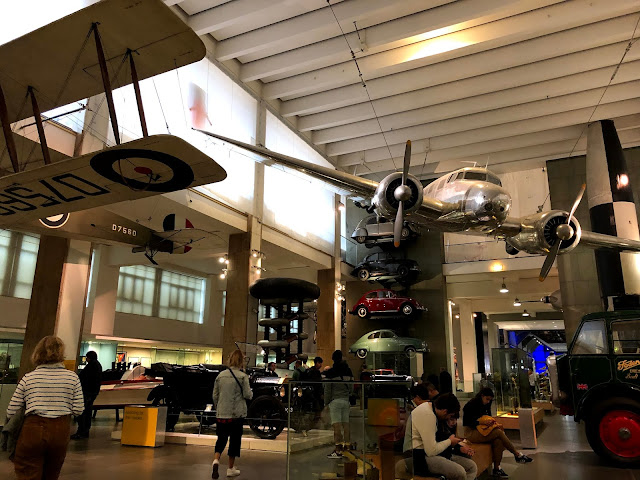 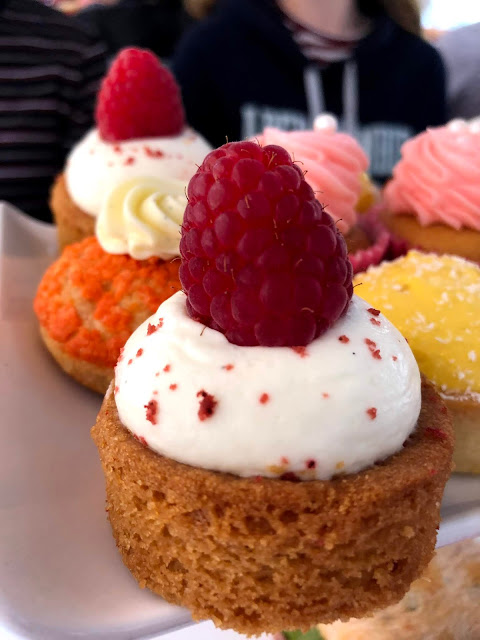 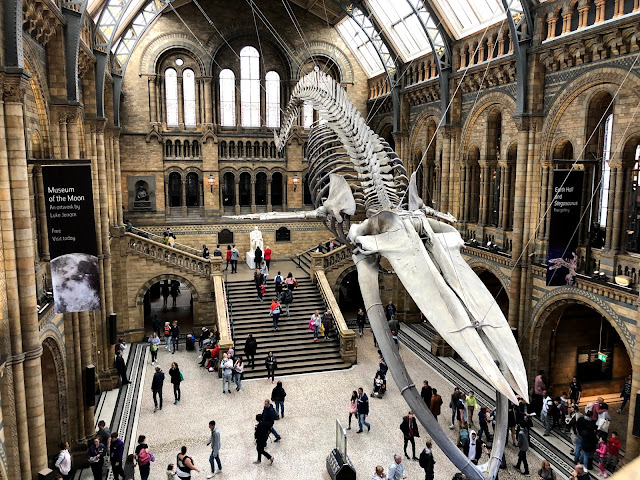 Our adventure started at 7 am at the train station in Solothurn. Unlike the classes before us, we asked the organizers of the week, wether we could take the train instead of the aeroplane. SimplyScience and Roche kindly took our wish into account. At times where the consequences of climate change are very apparent, it was an important issue for us and we were glad that our concerns were taken into consideration. By taking the train we only emitted one 8th of the co2 we would have emitted by flying. As we were such a big group this had an even bigger impact. And so we finally departed. After stopping in Basel, Strasbourg and Paris we arrived at London St. Pancras and transferred to the Hotel by coach. Refreshed by a short shower we met for our first briefing where we were introduced to the local organizers. Besides getting some snacks, we went through the program for the week, which amazed us and made us look forward to the upcoming days even more. In the evening we enjoyed our first dinner in China Town. Following a delicious meal we took a short stroll back to the hotel. We enjoyed some muffins for desert and fell tired to sleep. 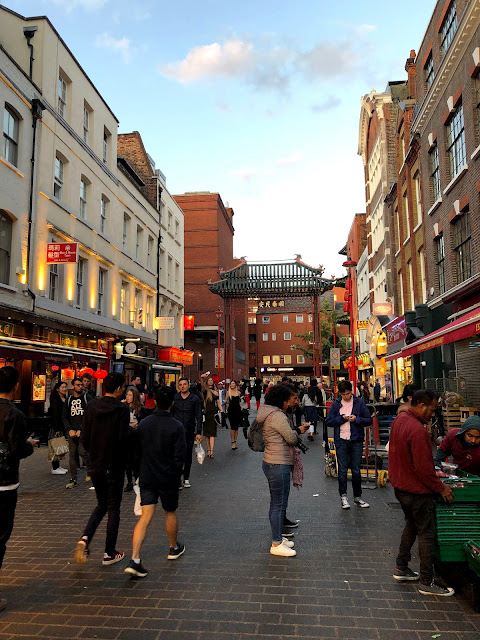 
The winner of this year's Science on the Move competition is class B16a from Kantonsschule Solothurn – Congratulations! The students will spend an exciting science week in London and Cambridge from September 8th to September 14th . During their trip, they will be posting here their experiences and pictures. We are looking forward to it!
Eingestellt von SimplyScience Keine Kommentare: